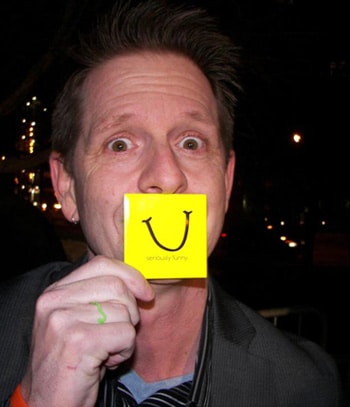 Natural likeability, original jokes and the knowledge to make it all look made up every time…this is what Comedian Mike brings to the table.

With a strong improv background, he takes you on a trip. While working with such luminaries as Tim Allen, Jerry Seinfeld, Chris Titus & Ellen Degeneres, Mike created a polished act that he has performed in 48 states. He headlines the Comedy Stop at the Tropicana in both Las Vegas and Atlantic city, The Comedy Castle in Detroit, Funny Bone South Bend, Spellbinders Houston & countless other clubs and colleges from New York to L.A.

Though you might be fooled by Mike’s youthful appearance, his smooth and energetic act reflects that of a comedic veteran. Mike’s infectious enthusiasm and entertaining stories keep crowds in stitches. Whether a college, club or corporate audience, if you haven’t seen Mike Green, you just aren’t very cool!

“Live in Madison” is Mikes first C.D.  It is 14 tracks of comedy that Mike calls “Pop culture remember when you were a kid stuff”.

“If you liked the kid in lunch room who made you spit milk out your nose you’ll love Mike”.  – Detroit News

Dean,  Everything was excellent at our January Post Holiday party!  Corey handled all the logistics and announcements very well, including his own DJ activity.  The comedian, Mike, was one of the funniest guys we have ever seen.  The house was in stitches, with tears running down faces, and jaws hurting from laughter.  He was non-stop, the quips and jokes just kept rolling out of him at a pace I haven’t seen in many comedians.  The dueling pianos were the usual high energy great act also, with everyone singing along.  All-in-all everyone had a great time and enjoyed the entertainment, even though we crammed a lot into the time period.
Thank you for your usual great assistance,
Ken