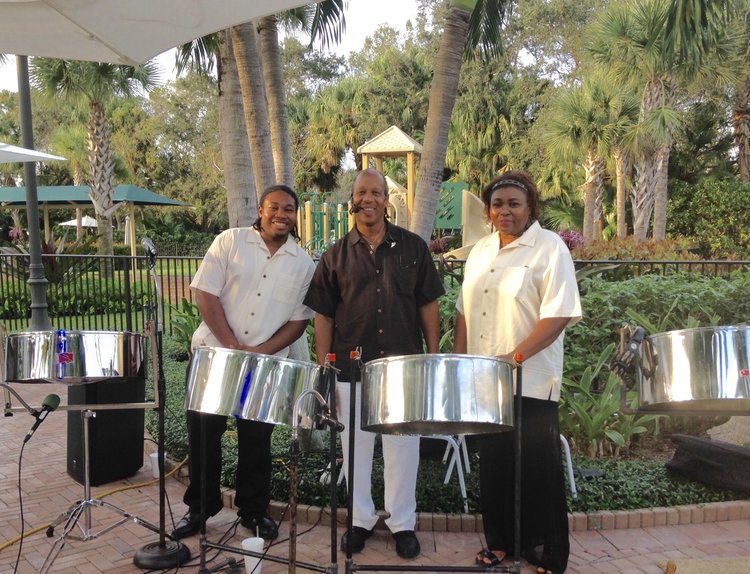 Now in there 30th year, TGSB has an extensive performance record from performing for 1 year old to 100th birthdays. Performing High School Basketball games to playing for “The Stanley Cup Finals” Governors, Congress and Senators, Nelson Mandela and many more!

The Band started September 15, 1988. After a head concussion that left him speechless, Chaz Russell started The Gratitude Band in “thanksgiving of healing”.  1 panist and 2 vocals. The trio put their pan and gospel together in a style called Gospelypso. Although there were a few that admired the style, the band found it’s success with high energy island styles with positive messages.  Along with their music therapy backgrounds and international performances, Gratitude continues to bring good vibes to the arts, maintain respect for Afro Cuban innovative rhythms, and still helps to relieve stress through music.

Good vibes at business events, showing hours of skill at concerts and preparing jam time shows for celebrations such as birthdays, weddings and graduations, they’re  always pushing to be the best in entertainment.

Weddings are there specialty with performing fine music selections from classical, Sinatra to Ella Stevie and of course Marley.

The Gratitude Steel Band began playing Wedding Ceremonies and Bar Mitzvahs and then The Detroit Auto Show 3 times , The Detroit Grand Prix and more. They began playing for mayors, congressmen and senators and governors. they aspire to perform at The White House.

They’ve performed the National Arts Council in conjunction with Princeton and University of Michigan. Also performed university commencement entertainment across the US. They’ve also done work for The Detroit Symphony Orchestra, The Jackson Symphony Orchestra and The Art Institute.

They’ve been part of school judging in Trinidad and Tobago for competitions leading toward Panorama through Pan Trinbago.

They’ve taught steel pan to 3rd graders up to high school  and a senior steel band up to 95 years of age ….

They’ve written a book called  “Discover The Steel Drums”  and have done numerous cds and videos including original music.